Now the Lord spoke to Moses in the Wilderness of Sinai, in the tabernacle of meeting, on the first day of the second month, in the second year after they had come out of the land of Egypt, saying: 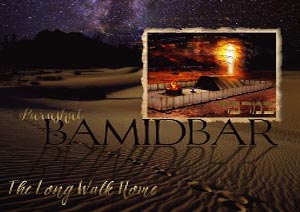 The book of Numbers does not start with the word bamidbar, which occurs a little later in the first verse, but rather with vayedabber (“and he said”). The word vayeddaber means “he spoke” and, in context, refers to God speaking. But the recipients of this divine word are not limited to a priestly hierarchy guarding to themselves the word of God. The Book of Bamidbar contains dramatic tales and teaches important ethical and spiritual life relevant today. However, it also spends a considerable amount of time describing the Mishkan (Tabernacle) and the camp of the people that surrounded it in the desert. How would the Mishkan be transported? What was the position of each of the tribes within the camp? These aspects of daily life in the desert are described in great detail.

Since Sinai the People of Israel learn to walk in the covenant made there with God. There is a way to be walked through the wilderness, as they were commanded to follow and live in accordance with the wishes of our Creator.

We read about the freedom from slavery, marching toward its independence, becoming educated and disciplined in creating order. We cannot content ourselves with protecting that which we care about from its enemies. We must live our lives in a way that gives kavod, honor and glory, to our causes and which softens the hearts of all those who see us.