“Speak to Aaron, and say to him, ‘When you arrange the lamps, the seven lamps shall give light in front of the lampstand.’” 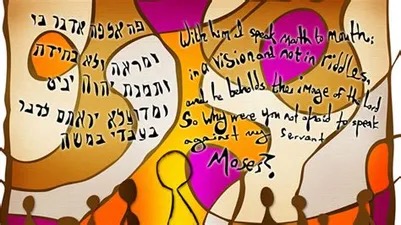 The parasha describes the customary way the Levites must undergo before they can handle the sacred objects associated with the tabernacle. The ceremony involves washing the Levites’ bodies and clothes, and full-body shaving (Num. 8:7). It also gives us insight into the Israelite journey through the wilderness. Far from undertaking a journey guided by their own instincts and initiative, the Israelites were bound to rely on divine guidance.

An unfortunate incident mars the otherwise solid familial bond between Moses and his siblings in Parashat Beha’alotekha. While in Hazerot, Aaron and Miriam engage in disparaging talk about their brother’s marriage to a Cushite woman. Jealousy sparks their venom as they malign their brother and declare, Num. 12:2 They asked, “Has Adonai spoken only through Moses? Hasn’t He also spoken through us?.

To Aaron and Miriam’s dismay, God “hears” their provocative words, holds them accountable, and punishes Miriam with a plague of leprosy. In the midst of this troubling episode, we receive a striking description of Moses and the depth of his relationship with God: Num. 12:3 Now the man Moses was very humble, more so than anyone on the face of the earth. God continues, Num. 12:8 I speak with him face to face, plainly and not in riddles. He even looks at the form of Adonai! Why then were you not afraid to speak against My servant Moses?. How important is such qualification of Moses and his intimate relationship with God. We see in this Parasha, just some weeks after their freedom from slavery, the People of Israel prepare to offer their Passover sacrifice to God. This is a unique moment in the history of the People, this sacrifice commemorates both their freedom, as well God’s redemption. Standing at Sinai, they entered into a covenant with God and agreed to accept God’s terms. It is clear also from this week’s reading indicates Moses’ unique qualities, one as a prophet, other as a very humble person we can see why is so important this qualification to have such an intimate walk with Abba. Moses’s humility was remarkable not because he held himself in such low esteem, but because he was so aware of his own power and not afraid to act. His humility is lauded at a most poignant moment of Moses interceding when it would have been easier to remain silent. After Miriam and Aaron question Moses’s unique role as prophet, God rebukes them and strikes Miriam with a plague.