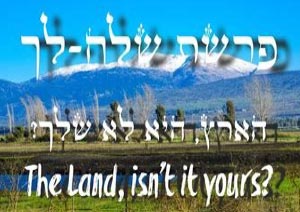 At the very beginning of the pasha, Moses organizes a mission to scout out the land of Canaan. As the Israelites stand on the verge of dispossessing the Canaanite nations, God commands Moses to reconnoiter the territory through the agency of 12 men representing each of the tribes. They are given specific instructions: “Go up there in to the Negev and into the hill country, and see what kind of country it is. Are the people who dwell in it strong or weak, few or many? Is the country in which they dwell good or bad? Are the towns they live in open or fortified? Is the soil rich or poor? Is it wooded or not? And take pains to bring back some of the fruit of the land” (Num. 13:18–20). Unfortunately, we know well that the mission goes awry as the majority of the scouts despair of the chance of conquest.

Both the Parasha and the Haftarah deal with scouts who were well-known men sent to scout out the land of Israel and many of them cowered before the Canaanites and reported their findings publicly, in connection with the ten scouts sent to reconnoiter the whole land, in the Haftarah, Joshua dispatched the spies secretly sent to reconnoiter Jericho and the spies reported that the Canaanites would melt before the Israelites and the spies reported directly to Joshua.

The men whom Moses sent to survey the land are described throughout this week's reading as scouts.  Never are they called spies, nor are their actions referred to as spying.  We quote:  "Send men to scout [Heb. la-tur] the land of Canaan" (Num. 13:2).  The root word is t-u-r, does not have the simple meaning of going around, from the straight and narrow along twisting paths.