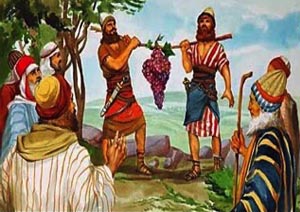 The men whom Moses sent to survey the land are described throughout this week's reading as scouts. Never are they called spies, nor are their actions referred to as spying. We quote: "Send men to scout [Heb. la-tur] the land of Canaan" (Num. 13:2). The root word is t-u-r, does not have the simple meaning of going around, from the straight and narrow along twisting paths.

After the Levites are appointed caretakers of the Dwelling Place for God and the Sanctuary is anointed, God says to Moses, “Send out men to explore the land of Canaan which I am giving to the sons of Israel.”
Each of the tribes of Israel sent a leader for the exploration. Moses said to these explorers, “See if the land is good or bad, fertile or lean. Are the people strong or weak, few or numerous? Are the cities opened or fortified?”

Is all about the eyes and the heart when in obedience to a commandment not to spy but to be an emissary and obey. The eyes and the heart, mentioned in this verse, represent two different psychological approaches, both of which affect one’s view of human morality. One approach maintains that the things which a person looks at causes him/her to sin, and therefore one must take care not to look at things that are likely to lead one astray. In other words, the eyes affect a person’s heart, as in Jewish commentary cited above, “The eyes see and the heart desires, and the body commits the transgressions.”