This is the law of the Torah which the Lord has commanded, saying: Speak to the children of Israel, that they bring you a red heifer without blemish 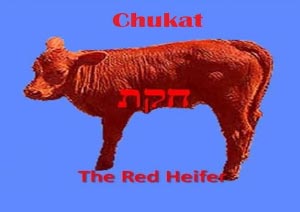 With the loss of both Miriam and Aaron, Parashat Chukat marks a liminal and tragic point in the Israelite wanderings toward the Land of Israel. In the aftermath of Miriam’s death, however, a dearth of water strikes the Israelites. This Parasha talks about a purification process involving water for people and their possessions. If one does not purify oneself after a state of uncleanliness, that soul shall be uprooted from Israel. Anything unclean must be made clean and pure before coming in contact with the holy Sanctuary.

They cry out in great thirst, and God turns to Moses, giving him explicit instructions for solving the people’s misery. Moses must take his rod and speak to a rock. Counter to these directions, Moses strikes the rock, and water pours forth. Moses is then severely punished by being barred from Israel. The exegetical query that has and continues to plague Bible commentators is that of identifying the precise transgression that leads to this severe decree against Moses. Moses’s offense on his growing impatience with the people give us a window into the soul of Moses—the angst with which he has wrestled as well as how his leadership has been pushed to its limits by the people’s behavior, and he calls them rebels in Numbers 20:10.

At the beginning we find the mysterious laws of the Red Heifer, a very rare animal that is burnt in a special fire outside the camp. Its ashes are then used to ritually purify those who have become impure due to contact with a dead body.
The portion then jumps ahead 38 years to the end of the Israelites’ wandering in the desert.