These are the journeys of the children of Israel, who went out of the land of Egypt by their armies under the hand of Moses and Aaron. 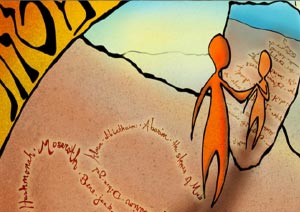 Our effort is to bring the Word of God into performance into the modern world. As we do so, it’s crucial to recall to share it with all around in our journeys.

Examining scripture, we find that the words Mate and Matot (tribe/s) occur frequently in descriptions of the military preparations for war, also occur frequently in the census of the tribes when organizing their military force, as described in Numbers. The connection between these words is most prominent in chapter 10, for the word Mateh occurs in conjunction with tzava (army, military force) in a phrase repeated eight times: "in command of the tribal troop."

What does restorative justice look like? The Torah pauses Israel’s journey toward the Land to consider this complex question. Forty years of desert wandering have come to their end, and only the thin ribbon of the River Jordan divides the Israelites from their promised land. As the distance remaining falls to footsteps, urgency mounts to establish values and norms for sovereignty and justice. The Land will test the people—with power and wealth, with conflict and war. They will become responsible for self-policing—how will they handle divisive and ambiguous cases such as manslaughter? One person has caused terrible harm to another and their family.

Perhaps they never intended to kill, but still, they have caused tragic loss of the most permanent sort. What consequence can restore a sense of justice for the offender, the victims, for society and for God? Torah warns the people of Israel not to pervert justice, but to apply it equally.