Now the Lord had said to Abram:
"Get out of your country, from your family and from your father’s house,
to a land that I will show you." 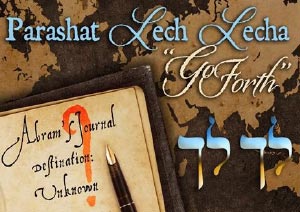 Lekh Lekha departs from the preceding biblical text as it introduces us to the lands, people, and civilizations that will serve as a backdrop for the millennia of triumph and tribulation that await Abraham, his descendants, and their contemporaries. Until now, the story has been fundamentally supernatural and ahistorical—the creation of the world and all that is in it, heavenly gifts and divine punishment, a cataclysmic flood, and extensive genealogies of the forebears of future nations, whose lifespans number in the hundreds of years. In Lekh Lekha, however, the geographic and sociological backgrounds to our story are quintessentially worldly even as its plot depends on God’s injunctions and promises to Abraham. The introduction of these geographic and cultural elements frames the narrative of the Bible, making it more real and perhaps, by extension, more meaningful than a story relying entirely on supernatural struggles and fantastical phenomena.

Lekh Lekha lays the very foundation for our communal accounts and national revelation regarding the Promised Land, its borders, and its connection with those to whom it has been so promised. It makes clear, both implicitly and explicitly, that the road ahead will not be an easy one, and that the relationship between the people and the Land will forever be one of battle and intercession.

Even as the Torah engages us in Abraham’s epic adventures and divine promises, it impels us to focus on the real rather than the ideal, reminding us that dealing with the implications of these acts requires persistent and active engagement with God.