This is the genealogy of Isaac, Abraham’s son. Abraham begot Isaac. 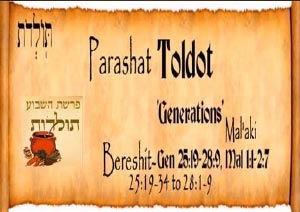 One of the most moving and deep verses of the Bible appears early in this week’s Torah reading. Rebecca, overcome with a difficult pregnancy, asks God, “Why me?” (Gen. 25:22). And God replies to her with one of the most fateful verses of the Bible: “There are two nations in your belly” (Gen. 25:23). The Parasha tells of the saga of our somewhat dysfunctional ancestral family continues, and included within is one of the family’s saddest and most poignant episodes. Yitzhak, implant of the family and heir to his father’s covenant with God, has just married at the age of 40. He and his wife, Rebecca, remain childless for 20 years, when, in response to his entreaties to God, she conceives.

Toldot, reflects the tension in human interaction and in the text, itself. Esau and Jacob are described in sharp contrast to one another. Although having such clear differences between the brothers may have made things simple in some ways, this lack of imagination created opposition and contributed to pain and tension within the family. When you think of Isaac, can you imagine him smiling? Although he was named for laughter (Yitzhak “Laughter”), few biblical characters lead a sadder life. Rivaled by his brother, nearly killed by his father, and left bereft at the death of his mother, Isaac never has it easy. He loves Rebecca, but her initial barrenness causes them sorrow, and starting with her pregnancy there is constant strife in their home. Isaac ends up alone, betrayed by his wife, despised by his elder son (“may the days of mourning my father come soon”), and abandoned by Jacob, who takes his blessings and flees for his life. Even before the dreadful deception plays out, Isaac is not in a good state to give out blessings, and so he needs some assistance. Isaac requires a luxurious dinner of meat and wine before he can act the patriarch and transmit the blessings of Abraham.