And he commanded them, saying,
“Speak thus to my lord Esau, ‘Thus your servant Jacob says:
“I have dwelt with Laban and stayed there until now. 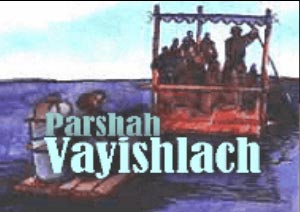 The lifetime feud between brothers weighed Jacob down. It was not just actual fear of Esau’s threatened retaliation for past events (see Gen. 27:41) that haunted Jacob. It was the fear of facing the fact that he had taken something that was not his and had fooled his father into cooperating. As implied by his name, Ya’akov, Jacob recognized he had behaved “deceptively.”

In this week’s Torah reading, Parashat Vayishlach, we read of Jacob’s journey home with his family after freeing himself and his entire clan from his father-in-law, Laban’s, control. Along the route, Jacob prepares himself for his eventual reunion with his older twin brother Esau, whom he fears to be vengeful. Right in the middle of the parashah, in between the description of Jacob’s preparations and his actual meeting with Esau, Jacob is involved in a transformative experience: a physical struggle with the Angel of Adonai. He comes out of the encounter newly named “Israel.

The Torah only tells us that, “Jacob was left alone. And a man wrestled with him until the break of dawn” (Gen. 32:25). But, if in fact he was left alone, with whom did he wrestle? Was it with a messenger from God, an angel, as alluded to by the prophet Hosea 12:44 In the womb he grasped his brother’s heel, and in his vigor he strove with God? The ultimate lesson of the Jacob encounter is that, even if we come out a bit scarred, if we face our fears and win the struggle, we can move forward, changed at the core, and stronger to face the future.