Then it came to pass, at the end of two full years,
that Pharaoh had a dream; and behold, he stood by the river. 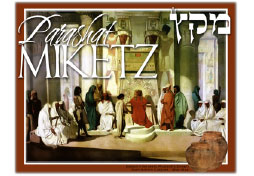 In Parashat Miketz we read of a cry that was not heard. Upon recognizing his brothers, Joseph accuses them of being spies. He first threatens to jail all but one of his brothers and send the remaining one to bring back Benjamin with him. He then relents and requires only one of them, Simeon, to remain as hostage while the others bring food to their families and then return with their youngest brother.

After their release the brothers reflect on the cause of their adversities. “They said to one another, ‘Alas, we are being punished on account of our brother, because we looked upon his anguish, yet paid no heed as he pleaded with us. That is why his distress has come upon us’” (Gen. 42:21).

We like the brothers, never heard Joseph’s pleas. We accepted the narrative as it was recorded in Genesis 37; the brothers strip Joseph of his clothes, cast him into a pit, consider letting him die and finally sell him into slavery. We hear not a word from Joseph. And yet, if we think for a moment, we realize that of course Joseph must have spoken. He must have protested, screamed, begged, perhaps even cursed. Although rendered in the style of the omniscient narrator, the Genesis 37 narrative is in fact told from the brothers’ perspective. Joseph is a thorn in their side that needs to be removed.

The Joseph narrative continues its dramatic twists and turns as Joseph, through his talented dream interpretations, rises to become the second most powerful figure in the land of Egypt. More than that, he follows God’s masterful plan to save Egypt and the people of Israel from a devastating and prolonged famine, and he becomes no less than a hero and rescuer to the Egyptian people.