Then Judah came near to him and said: “O my lord, please let your servant speak a word in my lord’s hearing, and do not let your anger burn against your servant; for you are even like Pharaoh. 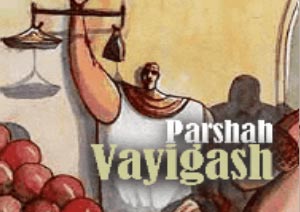 In this week’s parashah, Jacob reunites with his beloved son, Joseph, after 22 years of separation during which Jacob believed that Joseph was dead. Their emotional reunion is described in this passage: Joseph ordered his chariot and went to Goshen to meet his father Israel [Jacob]; he presented himself to him and, embracing him around the neck, he wept on his neck a good while. Then Israel [Jacob] said to Joseph, “Now I can die, having seen for myself that you are still alive.” (Gen. 46: 29–30) Joseph holds not just the economic upper hand, but has the advantage of more information, as well. He knows the identity of his brothers, while they are in the dark. The moment in which the brothers reconcile can only happen when Joseph makes known who he is.

Reconciliation comes with recognition and disclosure for healing to happen between the brothers as Joseph takes off his masks, peels away his persona of success and refers to himself as “your brother, the one whom you sold.”

Note that Joseph says “I am Joseph” twice, as if surprised by his own words. Or perhaps Joseph has to repeat himself because the brothers are in a state of shock and disbelief. Joseph demonstrates to his brothers that his essence has not changed, ultimately, it is he who enables to establish connection with his brothers, to forgive them, and to seek harmony and relationship with them.

We too, will merit to say our own version of, “I am Joseph.” And may we merit to show others that we hear them and believe, so we pave in them a new path for healing.