These are the words which Moses spoke to all Israel on this side of the Jordan in the wilderness, in the plain opposite Suph, between Paran, Tophel, Laban, Hazeroth, and Dizahab. 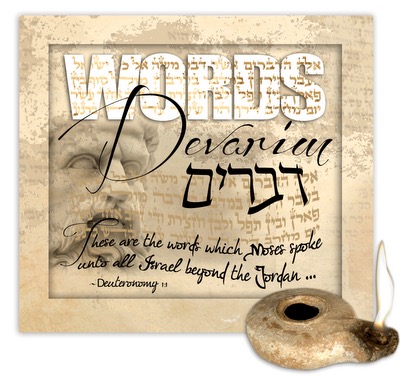 This coming Shabbat, we begin the fifth and final book of Torah as we read Parashat Devarim, the opening of the book of Deuteronomy. Moses addresses the People in Moab, just as the next generation under the leadership of Joshua is about to enter the Land. It is both a time for retrospection and introspection. The narrative of the Israelites and laws of Torah are repeated as Moses delivers his final charge.

Devarim Known as Deuteronomy in English means words in Hebrew. This book starts the transition in the lives of the people of Israel, who are about to cross over the Jordan into the Promised Land. Moses describes the teachings and instruction of God in the life of the Israelites in their wandering in the desert. How they have been carried by God through the wilderness, fought for by God, shown where to camp and when to move, fed with manna, and provided for in every way (Deut. 1:29-33).

The Hebrew “natati lifneichem” means to “‘place at your disposal, and implies that the giving is already complete. One senses Moses’s frustration bordering on contempt as he laments both the People’s disobedience and his own inability to enter the Promised Land.
So upon entering the land, the people are  required to take responsibility for their needs and defense in a much more direct way. Here they must find their own food and water in the normal human way, rather than rely on God’s manna. Though God helps, the Israelites are not carried anymore, but rather must “be strong and of good courage to make their way to the Promised Land

These attributes of strength and courage are essential here. The reason the generation of the wilderness had to die out is that they were crippled by control, whether oppressive while slaves in Egypt God was on their side.