“Behold, I set before you today a blessing and a curse: 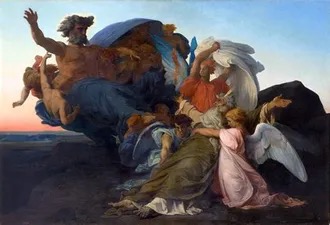 In Parashat Re’eh, the Israelites are given indication of the shape of their future society across the Jordan River. The description of the new life, generally radiates an exuberant sense of well-being.
To build societies in our Torah portion’s image, it may thus be cleverest to notice its own reproach: “Do not harden your heart and shut your hand against your needy brother. Rather, you must open your hand and lend him sufficient for whatever he needs” (Deuteronomy 15: 7-8). When we do so, we invite the possibility that from our open hands will not only fall seeds of prosperity — but also of peace.

This week’s Haftarah is the third in the set of seven Haftarot before the High Holidays, known as the “Seven of Consolation.” This Haftarah contains a beautiful promise of a society established on righteousness, and consequently free of oppression and fear and safe from ruin. These haftarot were not chosen due to their relationship to the weekly parasha; rather, for their relationship to the time period.
The Shmitah command, "Every seventh year you shall practice a remission of debts" (Deut. 15:1). After six years of plowing the soil on the 7th Shabbat year is the shmitah, the sabbatical year. It’s a time of freedom and release of all debts, labor and slaves. The word of God tells us that God will provide the year before with enough provision so the land can rest.