Now these are the names of the children of Israel who came to Egypt; each man and his household came with Jacob 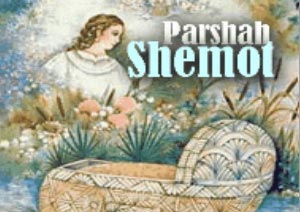 The parasha tells of the Israelites’ affliction in Egypt, the hiding and rescuing of the infant Moses, Moses in Midian, the calling o Moses, circumcision on the way, meeting the elders, an Moses before Pharaoh. Sh’mot opens by narrating the descent of Jacob’s line into enslavement. Pharaoh pursues a ruthless policy of discrimination, enslavement, and extermination. Still, what is most striking about this first chapter of Exodus is not the brutality of Pharaoh, but the humanity of two heroines, Shifra and Puah. Pharaoh commands these two midwives to kill male Israelite children.

In Parashat Shemot, it appears that Moses took conscious steps to maneuver, taking action that seems unlikely had a larger crowd been present. Raised in Pharaoh’s household, now an adult, Moses went out to walk among the Hebrew slaves as they labored. After witnessing an Egyptian beating a Hebrew slave, “He turned this way and that and, seeing no one about, he struck down the Egyptian and hid him in the sand” (Exod. 2:12).

It was only after concluding that no other witnesses were present that Moses acted alone both because he didn’t want to be seen and because he realized there was no one else who would stop this beating.  The miraculous burning bush, unconsumed and marvel in that desert terrain with supernatural wonder erupting inside the ordinary urgency  of Moses calling; for he is called to be God’s instrument of redemption, to alleviate the suffering of the Israelite slaves in Egypt. God who envelops all time past,  present, and future.  Ehyeh asher Ehyeh, the foundation of His Holy name.