Now these are the judgments which you shall set before them 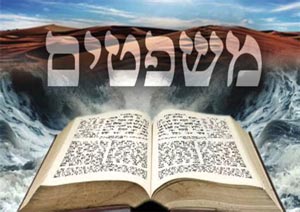 The Torah recognizes that each of us is an independent actor and that the fabric of society depends on each of us, singly and individually, to do the right thing. We are enjoined to do the right thing not only when it will make a difference, but even when it will not. Most interesting in this passage is how at the same time the text calls on each of us to take individual responsibility and do the right thing, it also pushes back against our inclination to be rogue actors in the name of justice, which instructs us not to hold up the poverty of a poor or underprivileged person as a legitimate factor in his favor in his dispute.

Rules, parameters, boundaries, thunder and lightning and voices of revelation at Sinai are followed by the labored specificity of the civil behavior for the People of Israel.
The Parasha sets out a series of laws, which some scholars call the Covenant Code, and reports the people's acceptance of the covenant with God, and goes from description to detailed instructions for every teaching, law and judgment they need to follow.

It’s also about that which sets apart ancient Israel from its neighbors. It is rare that the text is so self-evident that the reader can clearly determine whether the various things listed in the Torah are designed to keep Israel in. The story here is its simple lesson. It is not merely on the occasions of Sinai–to which few of us are ever witness–that we experience God, but it is also in the occurrence of our everyday lives. After the Ten Commandments were given at Mount Sinai, Moses was instructed to communicate them to the people.