“Speak to the children of Israel, that they bring Me an offering. From everyone who gives it willingly with his heart you shall take My offering." 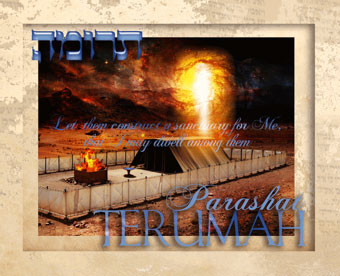 The only interruption in this principle detail is the story of the sin of worshiping the Golden Calf and its aftermath in Exodus 32–34. The ritual details continue into Vayikra with the list of sacrifices in the cult. The climax of the entire section is Leviticus 9 and 10, where the Tabernacle is dedicated with elaborate rites.

Both the Parasha and the Haftara describe a great Jewish leader’s arranging resources to build a dwelling place for God, Moses’ collection of gifts to build the Tabernacle, In order to transform the one-time Revelation at Sinai into a regular and perpetual revelation and fix a dwelling place for God at the Israelite camp. Solomon’s conscription of labor and collection of timber and stone to build the Temple in Jerusalem for a structure where God could dwell among the Israelites.