Now the Lord called to Moses, and spoke to him from the tabernacle of meeting, saying: 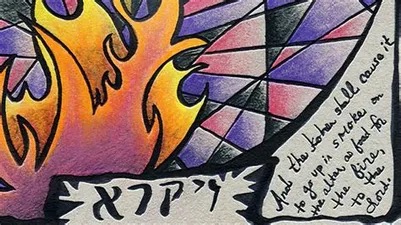 Vayikra, the third and middle book of Torah, provides an invaluable lesson in establishing a sacred community -a nation of priests- understanding the need for communal responsibility whose daily manners perfect the world under God’s rule.

By establishing an ideal community, Vayikra recognizes that actions speak far more eloquently than words, that living in a devout community provide awareness of God’s presence.

While this week's Torah reading—and indeed the whole book of Leviticus—is consumed with the sacrificial rites that dominated Israelite religion until the destruction of the Second Temple in 70 CE, its lessons on expiatory sacrifices cannot go unnoticed.
The word of God basic notion is given to those who suitable prepare themselves to receive it.  Preparing oneself outwardly by washing and avoiding impurity does not serve unless go together with a deep spiritual preparation.  At Mount Sinai, God spoke His words to all Israel, but the people chose not to hear the voice of the Lord firsthand, but rather from the mouth of Moses.
At the very center of the Torah, in chapter 19 of the book of Leviticus, we find (v. 18) the instruction that Yeshua said was the most important of all: to “love your neighbor as yourself.” Rabbi Akiva too called this “the great principle” of Torah. Love is an integral part of our Spiritual life to which Leviticus calls its readers: not taking vengeance, treating strangers and the needy well, offering sacrifices properly on the altar, observing the Sabbath, and performing dozens of