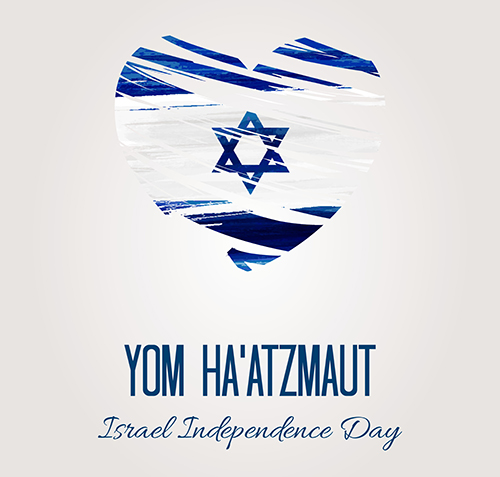 Independence Day Yom Hatzmaut,  (pronounced ‘ahtzma-oot‘)  is a national holiday in Israel commemorating the signing of Israel’s Declaration of Independence. The document, officially dated to coincide with the termination of the British Mandate on May 15, 1948, was proclaimed by the Israeli government on the fourteenth because the fifteenth was a Shabbat day.

Israel’s Declaration of Independence concludes with a clause testifying to her trust in God: With trust in the Almighty we set our hands to this Declaration at this session of the Provisional State Council on the soil of the Homeland in the City of Tel Aviv on the Sabbath Eve on the Fifth of Iyar 5708, the fourteenth of May, 1948.

Yom Hazikaron, the Israeli Fallen Soldiers and Victims of Terrorism Remembrance Day is followed by Independence Day. Independence Day is founded on the declaration of the establishment of the State of Israel by the Jewish leadership headed by future Prime Minister David Ben-Gurion on 14 May 1948. The mood outside of Ben-Gurion's home just prior to the declaration was joyous: "The people were dancing because they were about to realize what was one of the most remarkable and inspiring achievements in human history: A people which had been exiled from its homeland two thousand years before, which had endured countless pogroms, expulsions, and persecutions, but which had refused to relinquish its identity—which had, on the contrary, substantially strengthened that identity; a people which only a few years before had been the victim of mankind’s largest single act of mass murder, killing a third of the world’s Jews, that people was returning home as sovereign citizens in their own independent state."